The mimosa : the nugget of the Cote d’Azur

Every year between the beginning of January and mid-March, the mimosa illuminates the gardens and forests of the Mediterranean coast that have fallen asleep in winter. Focus on the nugget of the Côte d’Azur.

The mimosa was imported to France from Australia at the beginning of the 19th century by the great explorer James Cook and quickly adapted to its new environment. Very robust and resistant, it first took root in the Esterel massif between the Alpes Maritimes and the Var before developing throughout the region. The mimosa grows quickly and is very invasive: between 30 and 60 cm per year. It particularly appreciates the temperate climate of the Côte d’Azur and fears frost. Its characteristic pompom-shaped flowers are visible between mid-December and mid-March depending on the year and the weather.
Particularly ornamental, the mimosa very quickly found its place in the gardens of the aristocrats of the south of France.

At the beginning of the 20th century, the very harsh winter caused all the plants to freeze and almost destroyed the species and the productions. Also, shortly after this disaster, in order to celebrate the return of the mimosa thanks to the particular care taken by the producers, the first mimosa festival was organized in Mandelieu la Napoule (Alpes Maritimes) in February 1913. Nowadays, more than around a hundred nurseries cultivate some 1,200 different varieties of mimosa and around 8 million bouquets are shipped around the world each year.
In addition to being aesthetic, the mimosa is also cultivated for its essences that can be found in certain famous perfumes from the houses of Givenchy or Yves-Saint-Laurent. Its use in the decorative, cosmetic or culinary field has become more democratic: do not miss the mimosa jelly, as delicious as it is gourmet!

The history of Bormes is intimately linked to that of the mimosa. Present in the town for decades, it was in 1968 that the authorities decided to attach “Mimosas” to the name of Bormes as the plant is so luxuriant there. Among the hundreds of varieties known in the world, including more than 600 in Australia, there are more than 90 in the town alone. If many are located in the hill in the wild, others can be seen with free access to the Gonzalez garden in the heart of the old village, a garden designed to accommodate all kinds of plants of Australian origin. As a reminder, and following numerous abuses, it is strictly forbidden to cut mimosa in the hill or on the roadside.
If you want to bring a mimosa plant home, buy a bouquet, or visit the farm, go to the Cavatore nursery at the entrance to the town where Julien and his family, settled since the 80s, cultivate with love and passion more than 200 different varieties.

Every year in February, many towns in the Var and the Alpes Maritimes organize a parade of flower chariots, thus celebrating the mimosa and, more generally, flowers and nature: this is the corso. If originally chariots or carts were towed by donkeys or mules, tractors have now replaced them. A real highlight of the village, this event attracts several thousand flower lovers every year. Do not miss the Corso de Bormes on Sunday January 19, 2023 and that of Le Lavandou on Sunday March 19, 2023.

The Mimosa route
You are in love with nature and beautiful landscapes: do not miss the mimosa route which joins Bormes les Mimosas in Grasse, passing through Sainte Maxime, Saint Raphael and Tanneron. This tourist route allows you to discover the riches of the Côte d’Azur in winter, with its authentic landscapes between azure blue and sunny yellow. 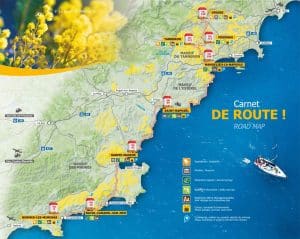